The direction of the relationship is straightforward in many questions. For example, it can be assumed that the number of umbrellas sold depends on the weather and not the other way around. In the case of other questions, however, the direction of the relationship is less obvious. But it is impossible to establish causality by means of a regression. It is therefore important to provide a strong theoretical basis for the assumed direction of the correlation. With the help of a regression analysis, it becomes possible to study the following types of questions:

How to conduct a regression analysis can now be explained based on the following question taken from the field of marketing research.

Do ad expenditures for a particular product influence the number of units sold?

1. The null hypothesis and the alternative hypothesis for the whole model are as follows:

Whereby the equation of the simple linear regression is formulated as:

Note: The regression line is the line that minimizes the sum of the squared prediction errors (error term). There is always only one such line.

2. The null hypothesis and the alternative hypothesis for the various regression coefficients are as follows:

To test the hypothesis, it is first necessary to obtain data (see Table 1: Example file). 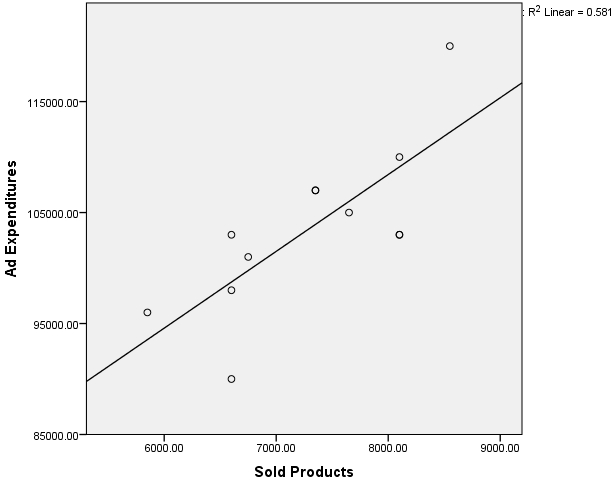 The scatter plot indicates a linear correlation between the variables of “Ad expenditures” and “Number of products sold.”

The simple linear regression analysis aims to estimate the regression equation. In the case of a perfect linear correlation, all the points would fall onto a line. Figure 1: The scatter plot, however, shows that none of the data points are exactly on the line. These forecast errors, i.e. the difference between a particular observed value (data point) and the value as predicted by the regression line, are referred to as residuals. For this reason, it is necessary to calculate a line that minimizes the sum of the residuals. The Ordinary Least Squares Method (OLS) is generally used for this, which involves squaring and adding up the residuals of all data points and then minimizing the sum. The residuals are squared so that the larger distances can be weighted more strongly and the positive and negative distances don’t eliminate each other. This procedure produces the best estimated values of the coefficients of the population.

Quality of the regression model

The coefficient of determination R2 indicates how well the regression function fits with the empirical data. This is determined based on the residuals mentioned above. In general, R2 shows the part of the variance of the dependent variable that the regression function explains, whereby R2 as the standardized measure can take on values between 0 and 1.

Note: When R2 takes on the maximum value of 1, the linear correlation is perfect, which means that all regression residuals equal zero.

Note: In the case of a simple linear regression, the coefficient of determination R2 can also be calculated as the square of the correlation r between the observed and the estimated values of the dependent variable.

To predict an attribute in a sample meaningfully by means of a regression equation, it must be possible to generalize the attribute onto the population. Reviewing the regression function and the various regression coefficients for significance allows for such a generalization to be made.

Besides the prerequisite of normal distributed and interval scaled variables, the linear regression model is based on various assumptions. These are referred to as Gauss-Markov criteria, and they ensure that the OLS estimate of best, linear, unbiased estimator (BLUE) will generate the parameter (β0, β1) of the population. 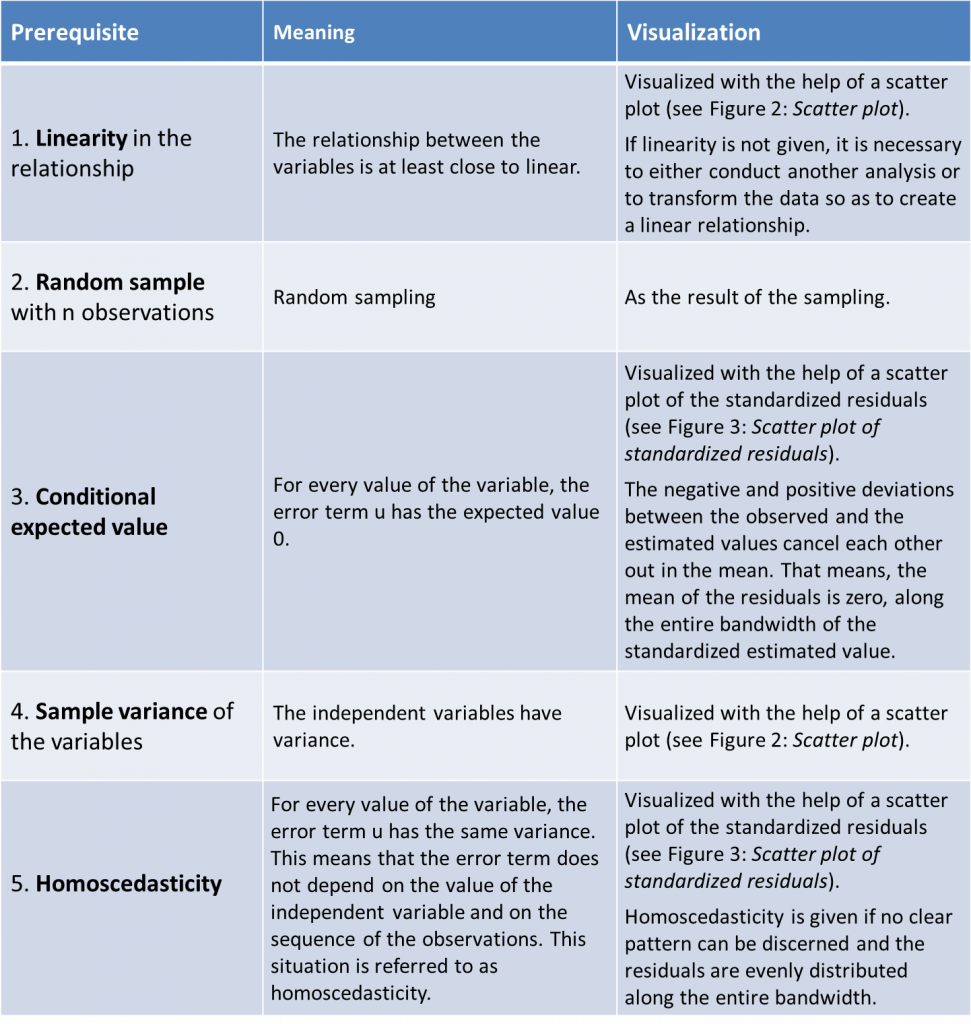 The linear regression model is based on two further assumptions. These are (see Wooldridge (2005)) 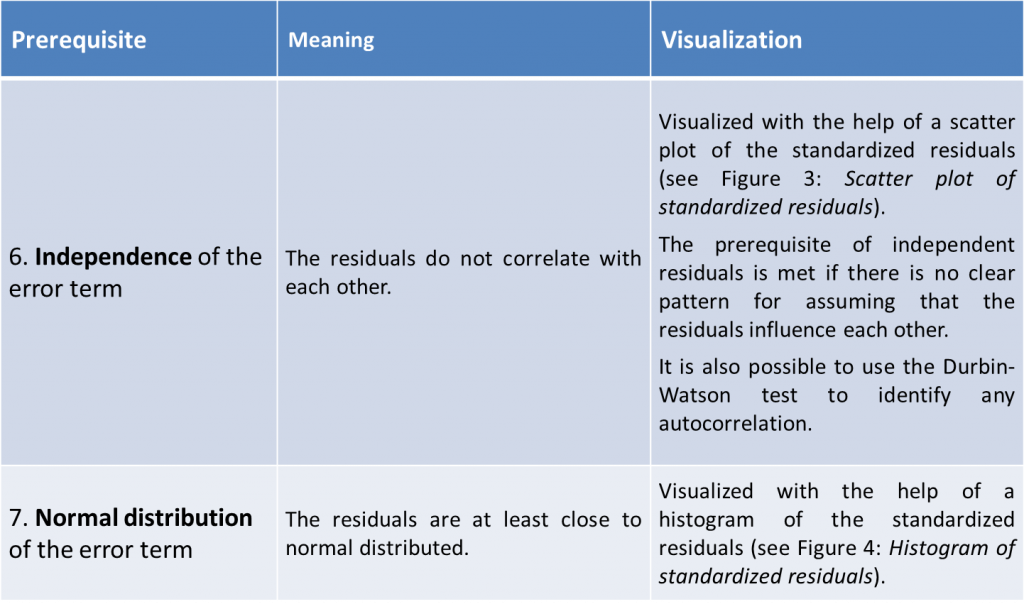 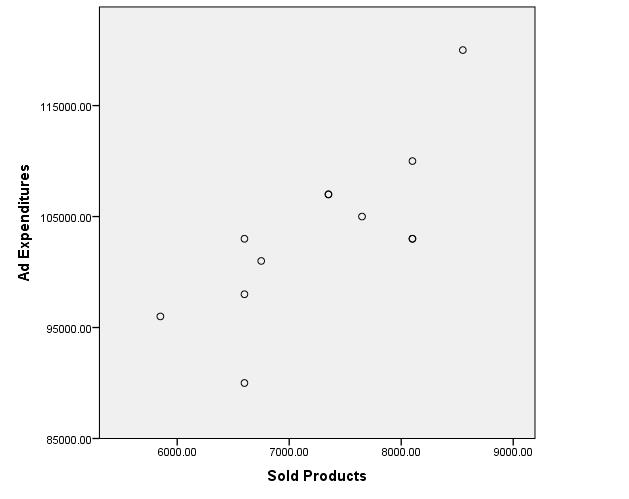 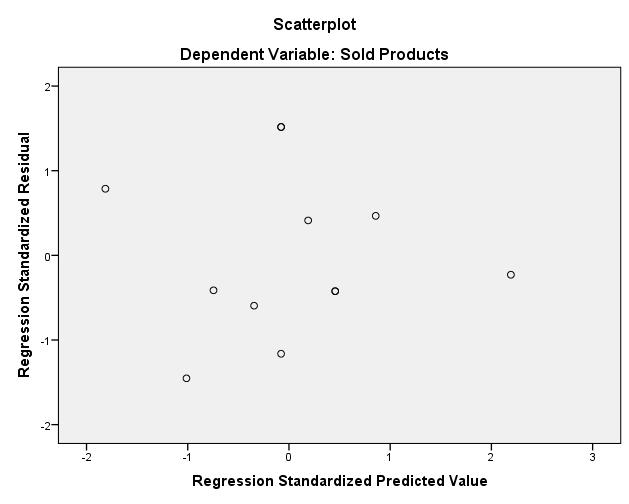 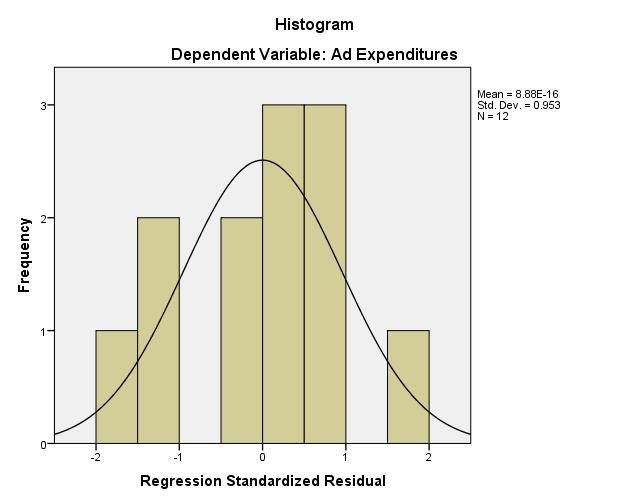 The following figures show the results of the simple linear regression in the sequence as produced by SPSS.

The value of the corrected R2 equals .539 (see Figure 5: “Coefficient of determination”). This means that the regression model can explain 53.9% of the variance of the “Number of products sold” variable.

From the table in Figure 6: “Testing the regression function,” it is possible to obtain the F-value and the associated significance level (p-value). As a rule of thumb, the generated p-value must be less than .050. For this example, SPSS produces an F-statistic of 13.871 and a significance (p-value) of .004. Because the p-value is less than .050, it can be assumed that there is a statistical correlation between the “Ad expenditures” and “Number of products sold” variables.

A CHF 1 increase in ad expenditures would thus result in 0.762 additional products sold.

(For the regression line in the SPSS output, double-click on the diagram and select “Adjustment line” for the overall value.)