The rank correlation is a non-parametric statistical procedure used for determining the bivariate correlation of two at least ordinal scaled attributes, whereby two ranking sequences are compared with each other. In order to determine the size of the correlation it is necessary to calculate Spearman’s or Kendall-Tau’s rank correlation coefficient. The rank correlation can be used when the prerequisite of normal distribution is excessively violated in the case of interval scaled dependent variables. The characteristics of both variables are carried over to the ranking positions.

This chapter explains in detail the procedure of the rank correlation based on the following question:

Is there a correlation between public expenditures on education in 1990 and adult literacy rates in different countries in 2003?

The literature summarizes the procedure of the rank correlation in three steps, which are described in the following section.

The question is examined based on a dataset from Caramani (2008) that captures the situation in 114 countries. The answer to the question can be found with the help of a model, which in this case looks as follows:

This section explains how to calculate the correlation coefficient. Table 1 shows the example data as raw data that has been ranked: 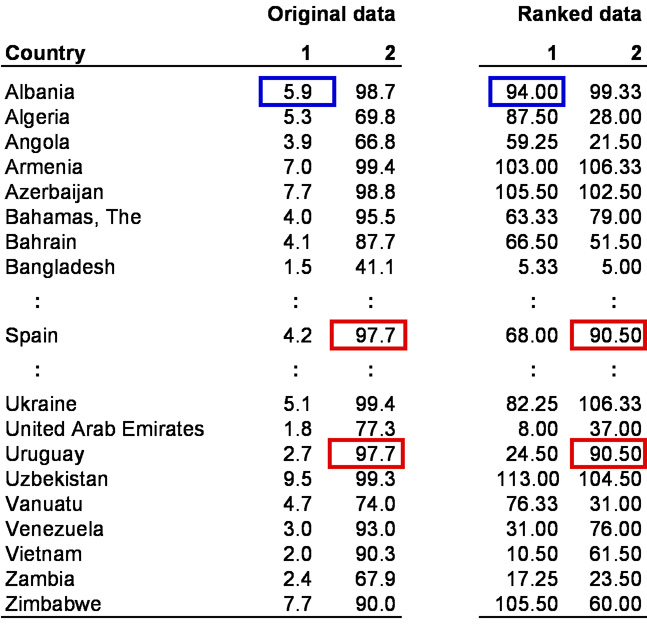 To calculate the rank correlation, the raw values (in this case percentages) of the two variables were converted into ranking positions, making it possible to compare the interval scaled variable and the ordinal scaled variable with each other. In this example, the ranking sequences of both variables include 114 positions (number of countries being examined). For example, Albania spent 5.9% of its gross domestic product on education in 1990, putting it in the 94th position (see blue markings in Table 1). In the case of ties (several objects produce the same value), the means of the respective rankings are formed and then allocated to the objects. For example, the population of Spain and Uruguay that was above age 15 had literacy rates of 97.7% in 2003. This corresponds to rankings of 90 and 91. In this case the value of 90.50 (means of the two positions) was used assigned to both countries (see red markings in Table 1).

Spearman’s rank correlation coefficient ρ (Rho) is calculated based on the the following equation:

The mentioned equation can be used only if there are no tied ranking positions, and it can therefore not be used in this example. The literature suggests an extremely complicated equation for calculating the test statistic in cases where ties exist, and it is not possible to go into it in further depth at this point.

SPSS produces the following figures when calculating the rank correlation:

Figure 4 shows Kendall’s Tau-b correlation coefficient with the associated p-value. Because this value is smaller than the significance level of .050, the null hypothesis is rejected and the alternative hypothesis accepted. The two variables being tested have a significant, positive correlation. The greater the public expenditures on education in the various countries in 1990, the higher the adult literacy rates were in 2003.