The multiple regression analysis is a widely used multivariate model, especially in empirical social research and market research. Unlike in the case of the simple linear regression analysis (LINK), multiple regressions allow for more than one independent variable to be included in a model. It can also be used to show and quantify causal relationships (analysis of causes) and predict the characteristic of the dependent variable (forecast).

For example, a multiple regression can be used to examine the following questions:

The procedure for conducting a regression analysis can be summarized in five steps, which are described in the following section.

Mono-causal relationships are rarely found in empirical social research and market research, and a particular dependent variable is usually influenced by several independent variables (Figure 1). Therefore, a multiple regression is considered to be an extremely important statistical procedure.

Figure 1: The dependent variable is influenced by several factors

The following question serves as an example for calculating a multiple regression:

Which factors influence the average life expectancy in various countries?

The model that goes with this question could look as follows:

This section explains how to estimate a particular regression function based on empirical data. Table 1 shows the six mentioned variables of 70 countries from the year 2008, data that the World Bank provided. 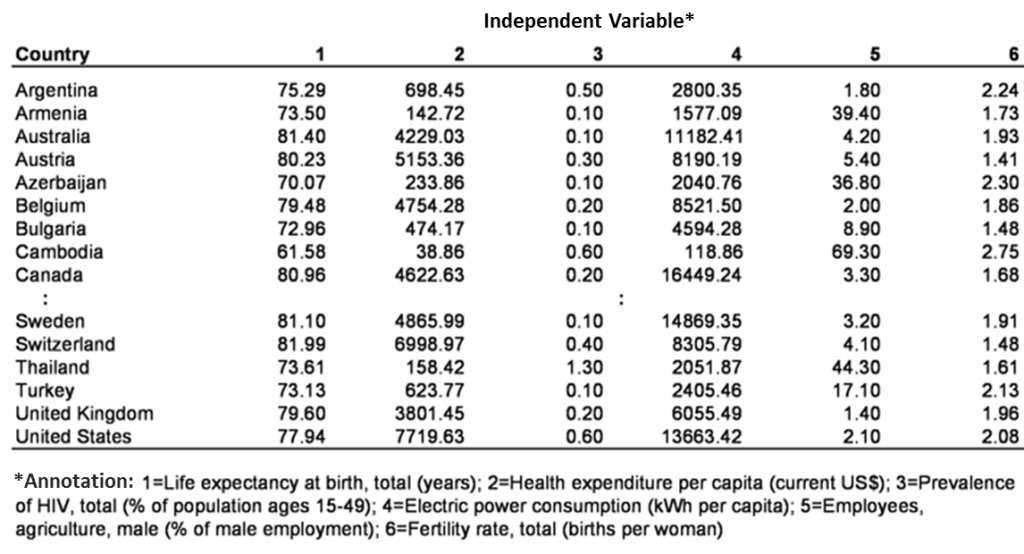 In this case, it is not possible to show the data as a diagram because there is more than one independent variable.

The equation of the regression lines with multiple variables is generally shown as follows:

y = the estimate of the dependent variable

k = the slope of the line of variable k

u = the error term

The regression equation with standardized coefficients can be shown as follows:

The coefficients of the different equations can be compared only once the same model has been tested on different samples and the variables have been captured in the same way.

This section tests the quality of the estimate of a particular regression function: The aim is to find out how good the model really is, which involves calculating the coefficient of determination R2 and the F-statistic.

2.3.1 The coefficient of determination R2

The coefficient of determination R2 is the first quality measure. It shows the ratio between the explained variance and the entire variance and indicates how well the regression line fits with the empirical data.

The R2 value is always between 0 and 1. In the case of a perfect linear correlation, R2 equals 1 and the model thus explains the entire variance. The smaller the value, the less of the variance can be explained through the equation.

In the example, the corrected R2 value is 0.772 (see Chapter 3: “Multiple regression with SPSS”), which means that the model can explain 77.2% of the variance.

According to Cohen (1992) the sizes of the effect are as follows:

whereby the following formula describes the relationship between f2 and R²:

The F-statistic indicates whether the coefficient of determination R2 came about by chance. This also considers the scope of the sample. This involves an analysis of variance that calculates the ratio of the explained variance (regression) to the unexplained variance (residuals).

For this example, SPSS produces an F-value of 47.601 and a significance (p-value) of .000 (see Chapter 3: “Multiple regression with SPSS”). This value is less than .050 and therefore significant. It can be assumed that the correlation of the variables did not come about by chance.

This section tests the independent variable’s contribution to the model as a whole.

Table 4 gives an overview of the variables, the associated regression coefficients, and the significance levels. The coefficients are important for estimating the influence of the different variables. In some cases, it makes sense to remove certain independent variables from the model (“stepwise regression”) once the coefficients have been tested:

If the output p-value is less than .050, it can be assumed that the regression coefficient is significant. In this example, this does not apply to the third independent variable IV3 (“Electric power consumption”) and the fifth independent variable IV5 (“Fertility rate”). It therefore makes sense to remove these variables from the model. Based on this example is becomes clear that although the model as a whole may be significant, it nevertheless is important to consider the individual regression coefficient separately.

Removing certain variables from the model will change the regression coefficient of the other variables.

This section explains how to test for autocorrelation among the residuals and ensure that there is no multicollinearity. Once the validity criteria have been met it is possible to interpret the model in terms of its content. If this is not the case, the model must be refused.

Carrying out the regression analysis also presupposes that the residuals of the data have the same variance. This condition is referred to as homoscedasticity, which can be tested by considering the residuals. In SPSS, the following diagram can be created from the example data: 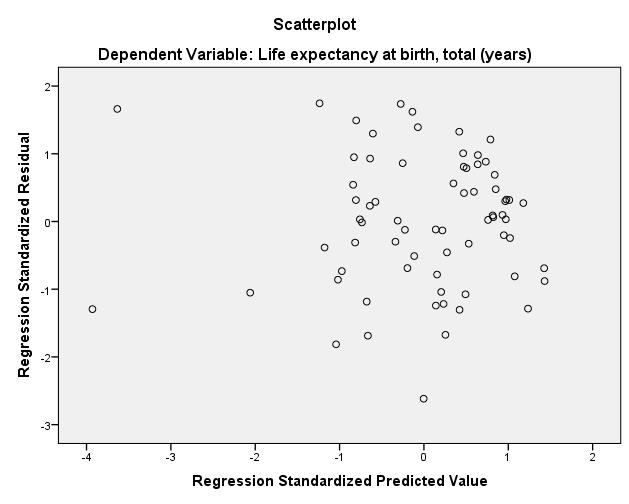 The x-axis shows the regression of the standardized estimated values of the dependent variable; the y-axis shows the standardized residuals. Heteroscedasticity is given when the diagram indicates that a relationship exists between the two variables or that a certain pattern can be discerned. Since this is not the case here, it can be assumed that homoscedasticity is given.

Carrying out a regression analysis also presupposes that there is no correlation between the residuals. In SPSS, it is possible to test for an autocorrelation by means of the Durbin-Watson test,

For the example data, SPSS produces a Durbin-Watson value of 2.011 (see Chapter 3: “Multiple regression with SPSS”) and it can therefore be assumed that autocorrelation is not given.

The variance inflation factor is the reciprocal of the tolerance value:

For this example, the tolerance values are between 0.434 and 0.857, and the variance inflation factor values are between 1.1167 and 2.306 (see Chapter 3: “Multiple regression with SPSS”). It can therefore be assumed that multicollinearity is not given.

This example shows that the available variables provide several options for calculating the regression equation.

For example, a certain variable could be excluded from the equation, which would then be calculated with only 3 or 2 independent variables. It therefore follows that additional variables also allow for a greater number of possible models.

The default settings in SPSS factor all the independent variables into the regression equation (see the “Linear Regression” dialogue box under “Method: Enter”). In SPSS, it is of course possible to calculate all the possible equations and compare the respective models; however, more variables also mean more work. SPSS offers several possibilities for a simpler comparison of multiple models, for example conducting a stepwise regression analysis (see “Linear Regression” under “Method: Stepwise” in SPSS dialogue box), whereby the variables are included in the model successively.

It may happen that SPSS suggests a particular model for the best possible solution; however, this may not be justifiable for theoretical or content-related reasons because it involves a mathematical analysis. In such cases, it makes sense to opt for a “mathematically” imperfect model, even if it means not being able to explain the same amount of the variance.

SPSS allows also for blocks of independent variables to be included in the regression equation successively. For example, IV1 (“Health expenditure per capita”) and IV2 (“Prevalence of HIV”) can be added as Block 1, followed by IV3 (“Electric power consumption”), IV4 (“Employees in agriculture”), and IV5 (“Fertility rate”) as Block 2. At the same time, every variable can also be included as a separate block. SPSS first produces the regression equation and associated values for Block 1, then for all variables from Block 1 and 2 together, then for Block 1, 2 and 3, etc., making it possible to see how the regression equation and values change when one variable is or several variables are added to the model. By selecting “R squared change” (under “Statistics”), SPSS indicates the increase in the R-square that the additional variable and/or the additional block of variables bring to the model.

Furthermore, it indicates whether the increase is significant. The sequence in which the variables or blocks are added can be determined manually. It makes sense to first include the variables in the blocks that can be best justified theoretically.

Within the blocks, however, it is possible to select the method freely. For example, in the case of 6 independent variables it is possible to first include 3 variables with SPSS’s “Enter” method jointly in the equation, then 3 variables with SPSS’s “Stepwise” method, allowing for comparisons of different types and models. But here, too, there should be a plan for how to proceed, because only models that are sound with respect to theory and content should be selected.

The following figures are of the SPSS output of the mentioned example.

Figure 8: Coefficient of determination and the Durbin-Watson statistic

Figure 9 shows the F-value and the associated significance level. The F-test indicates that the model as a whole is statistically significant.

The following figures are taken from the SPSS output for the model with only three variables. The independent variables IV3 (“Electric power consumption”) and IV5 (“Fertility rate”) have been removed from the model because of the non-significant regression coefficient.

Figure 11 has 0.774 as the corrected R2 value for the model. The model explains 77.4% of the variance of the dependent variable (“Life expectancy at birth”).

The F-test in Figure 12 shows that the model with three independent variables as a whole is statistically significant.

Figure 13 indicates that all regression coefficients are significant in the model with three independent variables.

Diagram of heteroscedasticity: In the regression window, select “Diagrams” > *ZRESID on the y-axis, *ZPRED on the x-axis