The steps for calculating a bivariate correlation can be explained based on a question taken from the field of human resources.

Data about a person’s motivation level is obtained through a standardized test that was conducted during a research project. The resulting motivation index can assume values between 0 and 20. Furthermore, various measured values (e.g. salary, rate of promotion, etc.) were used for compiling an index with values ranging between 0 and 100 for gauging a person’s professional success. Both variables can thus be interpreted as being interval scaled. The research question can be formulated as follows:

Is there a correlation between motivation and success?

The purpose of the inquiry is to find out if a person’s motivation and success at work are somehow related.

To test the research question statistically, it is necessary to formulate hypotheses. In this case formulating the hypotheses raises the question about the correlation between “Success” and “Motivation.” While it can be assumed that a person’s motivation is the cause of his or success at work, the opposite may apply as well: success at work can equally be the source of motivation.

HA: r ≠ 0 The correlation coefficient does not equal zero.

To test the hypothesis, it is first necessary to obtain data. The following Table 1: “Example data” contains the data of 12 test subjects.

The scatter plot indicates that a linear correlation exists between the variables of “Success” and “Motivation.” 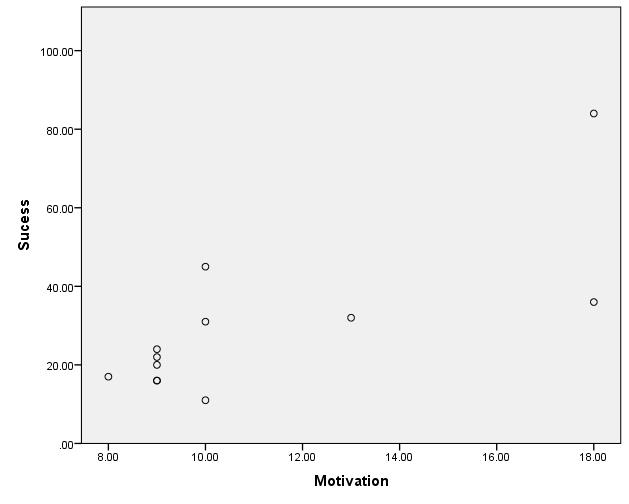 When calculating the correlation coefficient r it is assumed that a linear and non-directional correlation exists between the two variables.

Prerequisite data: Conducting the t-test presupposes normal distributed variables. Exception: One of the two variables is a dummy variable (2 categories).

Whether a correlation coefficient is significant depends on the size of the sample, among other things. For example, in a large sample, a smaller r value is sufficient for becoming significant than would be the case in a large sample. If a correlation coefficient is significant, the question arises as to whether the results are also of practical relevance. Here, the measure of the effect size is useful because it makes it possible to draw conclusions about the practical relevance of a significant test result and because it is virtually unaffected by sample size n.

The correlation coefficient r as a standardized measure is generally used for gauging the effect size. According to Cohen (1992) and Field (2009: 170) the following values apply during a correlation analysis to draw conclusions about the effect size, whereby the +/- sign indicates the direction of the correlation (see Table 2: Effect sizes).

SPSS automatically produces the p-value (referred to as “Sig.” in SPSS) when calculating the correlation.

Note: The dialogue box also offers the option of marking significant correlations. However, it must be noted that SPSS may require a different significance level. The values should therefore be checked again and compared with the defined significance level.

The table generated in SPSS shows the correlation and the p-value (see Figure 2: SPSS output of the example data): 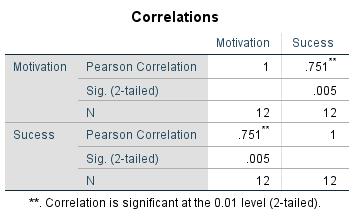 “Success” and “Motivation” correlate with a p-value of .005. If a significance level of α = .050 is given, the null hypothesis can be refused, which means accepting the alternative hypothesis according to which the correlation coefficient is unequal to 0. For the example data, SPSS produces a correlation coefficient of .751. It can therefore be assumed that a positive linear correlation exists between “Motivation” and “Success.” An r of .751 also indicates a large effect (see Table 2: Effect sizes). Squaring the correlation value r produces an r² value of .564. 56.4% of the data’s variability can be explained by the model.

Note regarding Figure 2: The correlation coefficient of 1 in the diagonal can be explained through the correlation of the variable with itself.

(Select “Pearson” in the dialogue box)