Pearson’s chi-square test of independence is a non-parametric statistical procedure with a chi-square-distributed test statistic that is used for testing the mutual dependency of two attributes. The chi-square contingency analysis is an extension of the “classical” cross-table test that examines each of two attributes against two characteristics.

Here, cross tables can be used for calculating the various coefficients that reflect the size and direction of the correlations.

This chapter explains in detail the procedure of the chi-square contingency analysis based on the following question:

Is there a correlation between age and the likelihood of getting intestinal cancer?

The procedure of the chi-square contingency analysis is summarized in three steps, which are described in the following section.

The question is examined based on a dataset provided by the Statistical Analysis Institute (SAS). The data is on 406 persons who had a colonoscopy (intestinal screening).

The answer to the questions can be found with the help of a schematic representation, which in this case looks as follows:

It is possible to calculate various coefficients that reflect the size and direction of the relationships. Three of these coefficients are described in the following section.

Figure 2 shows how frequently the attribute categories of the two variables being tested occur.

k = the number of cells

The calculated chi-square test statistic is afterwards tested for significance.

The coefficient of Cramer’s V can be used as an initial option for standardizing and is calculated as follows:

r = the number of rows

c = the number of columns

The expression “min(r-1, c-1)” means that the number of rows and columns is reduced by 1 and the smaller of the two values is used in the equation. Cramer’s V can also be useful when comparing several correlations between variables with each other.

Pearson’s contingency coefficient can be used as a second option for norming and is calculated as follows: 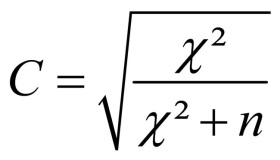 The upper limit of C is determined as follows: 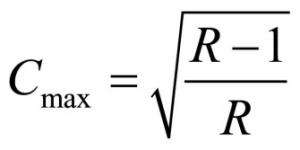 r = the number of rows

c = the number of columns

Pearson’s contingency coefficient serves only for comparing tables with the same number of rows and columns.

The following coefficients are calculated for the example data:

Table 1: Coefficients of the example data

Table 2: P-values of the coefficients of the example data

Because the p-value of the Chi Square coefficient is smaller than the significance level of .050, a correlation exists between the tested variables of “Intestinal cancer result” and “Age.”

2.4 Prerequisites for a chi-square test

Conducting the chi-square distribution test requires three prerequisites, which are described in the following section.

Secondly, the expected frequencies in all the cells of the cross table must be greater than 5. If this prerequisite is not met, the exact Fisher test should also be used instead of the chi-square test.

Thirdly, the degrees of freedom v = (r – 1) • (c – 1) should be greater than 1. The “classical” cross-table test that examines each of two attributes with two characteristics does not meet this prerequisite. In this case, the Chi Square needs to be corrected in accordance with Yates.

In this example, the second prerequisite is not met. However, because the two variables have more than two characteristics and not more than 20% of the expected frequencies are less than 5, the chi-square test can be carried out nevertheless. 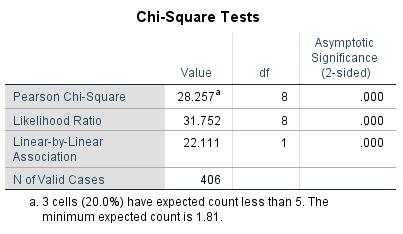 Figure 8 shows the Pearson’s chi-square test statistic and the associated p-value. The output p-value is less than .050. There is a relationship between age and the likelihood of getting intestinal cancer.

Figure 9 shows Cramer’s V coefficient and the contingency coefficient as well as the associated p-values. Because the coefficients are significant and positive, there is a positive correlation between the occurrence of intestinal cancer and age.