The t-test for two independent samples is used for answering the question of whether two groups differ in terms of a certain characteristic (consumer behavior, social inclusion, stress-resistance, attitude towards factual issues, etc.) or if an experimental group produces results that vary from those of a control group (success in treatment, effects of certain tests, etc.). This t-test therefore is suitable for questions such as “Does the consumer behavior of men and women differ?” or “Does the experimental group and the control group respond differently to a treatment method?”.

The procedure for conducting a t-test for two independent samples is explained based on a question taken from marketing research.

A group of respondents consisting of roughly half men and half women is asked to rate the quality of a product on a scale of 0 to 10, whereby 0 = “very bad” and 10 = “very good.” The research question can be formulated as follows: Do women and men rate the quality of the product differently?

The aim of the research is to find out if a product’s quality appeals equally to men and women.

To test the research question statistically, it is necessary to formulate hypotheses. It should thus be possible to find out if the difference in the sample means can be generalized onto the population underlying the samples.

H0: μ1=μ2 The means of the two parent populations are the same.

The means of the two parent populations differ.

To test the hypothesis, it is first necessary to obtain data (see Table 1: Example data).

Based on the means from “Table 1: Example data,” it can be assumed that women and men rate product quality differently. With the help of the t-test it is now possible to determine if this difference is also statistically significant.

Numerators and denominators are calculated as follows: 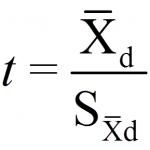 Note: The test value for a t-test with two independent samples is t-distributed with degrees of freedom (n1 + n2 – 2).

The calculated test statistic must then be compared with the critical value, which is determined by the number of degrees of freedom.

The following figures show the results of the t-test in he sequence as produced by SPSS. From Figure 1: Group statistics indicate the size of the sample, the mean, and the standard deviation of the sample.

Test for homogeneity of variance:

Figure 2: Testing for homogeneity of variance

For this example, SPSS produces a t-value of -3.834 (see Figure 3: Test statistic). This value still needs to be tested for significance. Since it has been determined that homogeneity of variance is given, the significance level in SPSS must be taken from the “Equal variances assumed” row. This example shows a significance (p-value) of .000, which is smaller than the significance level of .050. It can therefore be assumed that the means differ with respect to gender.

Note: Whether the null hypothesis can be rejected depends on the variance and size of the sample n, among other things. A large sample may result in a test producing a significant result more quickly. If the test statistic is significant, the question arises as to whether the results are also of practical relevance. Here, the measure of the effect size is useful because it makes it possible to draw conclusions about the practical relevance of a significant test result and because it is virtually unaffected by sample size n.

Cohen’s d (Cohen 1992) has become the established way of measuring effect size. It is not possible to calculate Cohen’s d with SPSS. However, it can be calculated with the G*Power (LINK to the program) program.