The Friedman test is a non-parametric statistical procedure used for determining whether there are differences in the central tendency of more than two dependent groups (or samples). The test examines the same objects repeatedly, for example by measuring different times or multiple treatments (e.g. medications A, B, or C). The dependent data are ranked within each unit of analysis (e.g. test person), and the groups must be of the same sample size. The dependent variable should be at least ordinal scaled. The Friedman test can be used in cases where the normal distribution prerequisite of interval scaled dependent variables is excessively violated and where carrying out a one-way analysis of variance with repeated measures is not possible.

The Friedman test (also referred to as analysis of variance by ranks) is a rank test in which the test statistic is calculated by comparing multiple ranking sequences. The underlying idea is that the data of the dependent groups in a sequence of joint ranks will have the same distribution if it has the same central tendency. The Friedman test is an extension of the Wilcoxon Signed-Rank test for two dependent groups.

This chapter explains in detail the procedure of the Friedman test based on the following question:

Are there differences in the severity of acne among patients at different measurement times (before the treatment, and 4, 8, and 12 weeks after the treatment began)?

The literature summarizes the Friedman test in four steps, which are described in the following section.

The question is examined based on a dataset from the University of York. The data is on 14 patients with acne who received medication over a 12-week period. During this time, changes in the severity of the acne was measured on a 12-point scale. The answer to the question can be found with the help of a model, which in this case looks as follows:

This example considers the 12-level dependent variables of “Acne Severity Scores” before the treatment starts and 4, 8, and 12 weeks after the start date.

This section explains how to calculate the test statistic. Table 1 shows the example data as well as the calculation of the sums of ranks of the different measurement times: 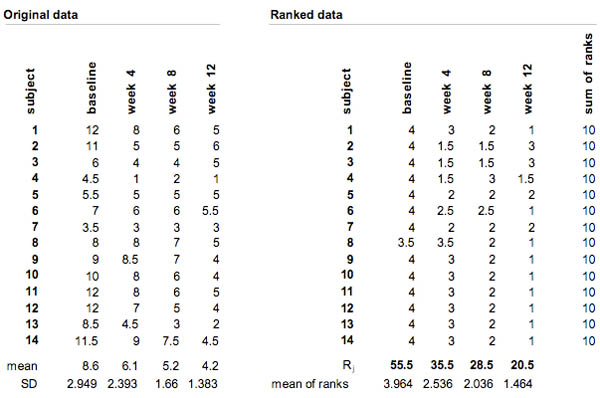 Table 1: Example data with calculations of the sums of ranks

The values of the Acne Severity Score are ranked within every test person. In the case of ties (same value for multiple measurement times), the averages of the rank are calculated. Four weeks and eight weeks after the beginning of the treatment, the third test person, for example, had an “Acne Severity Score” of 4, which corresponds to the first and the second rank within the person. Here, the rank value of 1.5 (mean of the two ranking positions) is assigned twice. The sums of ranks of the measurement times are formed by adding up all the ranking positions.

The test statistic FR of the Friedman tests is calculated as follows:

n = the sample size (the same for every measurement time)

k = the number of measurement times

Rj = the sum of ranks at measurement time j

SPSS automatically calculates the sums of ranks of all measurement times as well as the test statistic FR of the Friedman test.

This section examines the test statistic for significance. If the sample size for three measurement times is larger than 10 and/or for more than three measurement times larger than 5 (as in this example), the test statistic FR has a Chi² distribution. In this case, the calculated FR value is compared with the critical value of the Chi² distribution as determined by the degrees of freedom. SPSS performs the comparison automatically.

The Friedman test provides no information about which medians or median differ(s) significantly from the others. For this, post hoc tests (in this case “manually” through the Wilcoxon Signed-Rank test) that examine paired comparisons of the groups can be carried out to determine which differences in the central tendencies caused the Friedman test to produce a significant result. The new SPSS version can perform post hoc tests automatically: A double-click on “Summary of hypothesis testing” will open the “Model viewer,” in which “Paired comparisons” can be selected from “Display” (see Chapter 3: “Friedman test with SPSS”).

3.1 For older SPSS versions (up to SPSS 18) or the “Legacy Dialogs” in the newer versions

SPSS produces the following figures when performing the Friedman test: 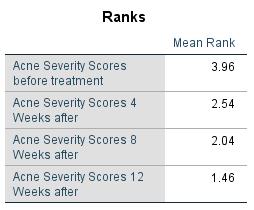 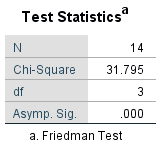 Figure 4 shows the test statistic and the p-value, which is smaller than the significance level of .050. It can therefore be assumed that at least one of the mean ranks differs significantly from the others.

Figure 5 summarizes hypothesis testing. The null hypothesis according to which the ranking positions of the different measurement times are distributed evenly in the sequence of joint ranks is rejected in favor of the alternative hypothesis. 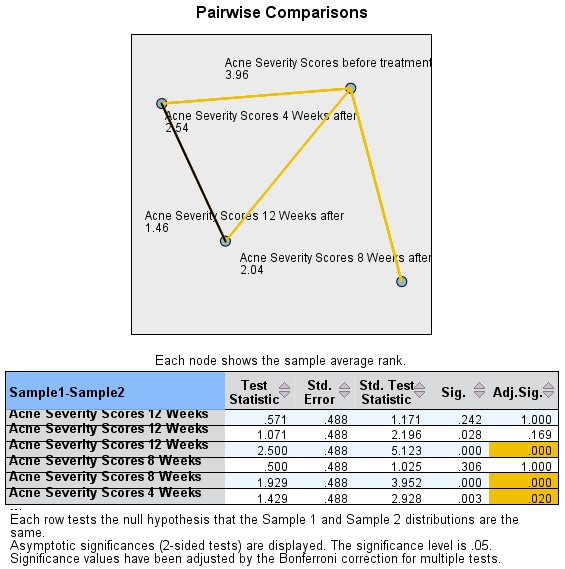